In this brave new mixed martial arts (MMA) world no longer ruled over by old gods Georges St. Pierre and Anderson Silva, UFC is going to need new superstars. Luckily, it may have a dazzling — if not always friendly — one on its hands with Ronda Rousey. Find out why Rousey’s unsportsmanlike snubbing of Miesha Tate was the best thing she possibly could have done to help make herself an even bigger star.

Thematically speaking, it couldn’t have been more appropriate Saturday’s UFC 168 event wrapped up just 72 hours removed from New Year’s Day 2014. If ever there was a fight card that embodied the hoary old cliche, “out with the old and in with the new,” this was the one.

If you’re a mixed martial arts (MMA) fan, there was a lot to like about 2013 when it comes to in-cage action. However, all those epic slobber knockers were largely obscured by a pair of falling giants who cast a prodigious shadow over Ultimate Fighting Championship (UFC) in the month of December.

First there was longtime UFC Welterweight champion Georges St. Pierre’s announcement he was taking an indefinite — possibly permanent — hiatus from the sport. That news may have sent those of us in the MMA world reeling like a perfectly placed left hook to our collective jaw, but St. Pierre’s willing abdication of his throne wasn’t near as shocking as what would follow a mere 15 days later.

Even after what we saw this past July — when Chris Weidman captured the UFC Middleweight title from the seemingly invincible champion who held it for just shy of six years — it still feels surreal to type what I’m about to type, but following UFC 168 it’s impossible to deny:

Like Napoleon in exile on Saint Helena, Silva no longer has the aura of the fate-appointed, conquering demigod about him. After all, the bones in demigods’ legs don’t gruesomely snap in two when they meet with an opponents’ shin.

Bones do, however, occasionally break when housed by the all too fragile flesh of an ordinary human being. Especially one who is nearly 39 years old and approaching the end of a long career spent kicking people in the face.

Weidman may be a lot of things — athletically gifted, incredibly skilled and tougher than an armadillo’s hide — but one thing we don’t know yet is whether or not he’s going to be a draw at the box office. UFC 168 did a monster gate and will likely make Zuffa a whole gripload of money on pay per view (PPV). However, the lion’s share of the intrigue surrounding the main event was based on seeing how Silva would bounce back from his first loss in years.

Historically, killing the king isn’t enough to make fans buy into a new champion’s reign. How Weidman fares as a drawing card from here on out will largely depend on intangibles like charisma and his ability to establish an emotional connection with fans.

One thing is certain though: with the company’s two biggest draws going gently — or in Silva’s case grotesquely — into that good night this past month, UFC needs legit superstars who can spark fan interest in the worst way possible.

Luckily, it appears to have one in Ronda Rousey.

To say the live crowd was jacked for the Women’s Bantamweight title match between Rousey and Miesha Tate would be putting it mildly. From the moment Tate’s music hit the atmosphere inside the MGM Grand appeared to crackle with the energy of a downed power line. Things went from electric to full on nuclear when Rousey made her way to the cage accompanied by the strains of Joan Jett’s “Bad Reputation.”

It didn’t hurt that Rousey vs. Tate was an awesome fight that told a gripping story: Tate — the fan-favorite thanks to her opponent’s unflattering portrayal on The Ultimate Fighter — trying desperately to fight back against her obviously superior foe and avoid the bear trap that is Rousey’s patented armbar.

The fight was so exciting, fans in attendance gave both women a standing ovation at the end of the first and second rounds.

When Rousey, her limbs wrapped around Tate’s body like a boa constrictor getting ready to squeeze the life from its prey, finally transitioned and locked on the fight ending armbar in the third round, it did nothing to deflate the amped up crowd. In fact, if after her dominant performance, “Rowdy” had played to the audience and courted their cheers, she may have won back a lot of fans.

Instead she did something even better.

As Tate stood next to the champ, attempting to offer her hand in a token of sportsmanship and beef squashed, Rousey turned up her nose and defiantly strutted away from her like she was auditioning for the lead role in a remake of the 2004 movie “Mean Girls.”

The boos were instantaneous.

A hailstorm of bass-voiced precipitation falling down on her, Rousey attempted to explain her refusal to shake Tate’s hand — some Diazian business about keeping it real — but it didn’t matter. The crowd was livid and couldn’t wait to see Rousey get her comeuppance.

Coming off her victory and subsequent snub of the crowd favorite Tate, Rousey is riding a wave of momentum into her Feb. 22, 2014, main event against McMann. What’s more, there is a ready-made story just waiting to be told with this match-up — one that could end up making UFC a lot of money.

Rousey has looked unbeatable so far. However, there’s nothing as infuriating as a jerk — and let’s be clear this is merely her public perception I’m talking about here, not my own opinion — who can back up all her arrogance inside the cage.

The former high school athlete Tate may not have been able to dethrone an Olympic Bronze Medalist like Rousey, but perhaps the Olympic Silver Medalist McMann might have a couple tricks up her sleeve that could potentially trip up the reigning queen of women’s MMA? It’s an intriguing question from a sporting perspective, but one made far more marketable by Rousey’s bad girl image.

Although it’s far from a given Rousey will defeat McMann, if she does then the sky is truly the limit.

UFC stacked enough paper to fill several of Scrooge McDuck’s money bins thanks to MMA purists who hated Brock Lesnar and bought PPVs hoping to see the “fake pro wrestler” get his ass handed to him. I seem to remember a lot of outrage about Lesnar’s behavior after a big fight as well, and far from “hurting the sport,” Lesnar’s post-UFC 100 speech gave fans a memorable moment that helped reinforce his character.

While Rousey may not have a built in crossover audience like the once and future WWE performer Lesnar did, there’s no reason to think a similar heel champion formula won’t work wonders for her, too.

And who knows? Just like we saw with Lesnar years ago, if Rousey sticks around long enough there’s a good chance she’ll go from being viewed as the arrogant heel we love to boo, to being cheered as the bonafide superstar we can’t resist.

Looks like we will never get the pleasure of seeing these super fights: 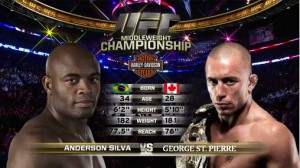 But the question still remains…who had the better champion reign out of Silva and GSP? Who defeated the more formidable opponents?

One thought on “Who had the better “Champion” reign? Is Ronda Rousey the face of the new era in UFC?”