Princess, a Daytona native, captures local artist in rare form. She’s gaining notoriety for her portraits, while supporting fellow artist. A woman of many talents and gifts, and nail art just happens to be one. This lady is painting the city red with her designs and 386 is her canvas. Read along as Keedie’s Corner illustrates her story;

● When you were younger did you have an interest in art or were you leaning towards cosmetology more? When did you notice this?

◆ I’ve always been passionate about art & creativity. My mother knew what my favorite color was as a baby because I would get excited about seeing colors, especially Red. Cosmetology came later when I turned 22 and realized I wasn’t good at hair after enrolling. My mother suggested doing nails & nail art,  since I was good at drawing. I’ve been drawing since the age of 3. I enrolled at Daytona State College in 1992 and got my nail license. I’m glad I took my mother’s advice because I love what I do! Eventually I went back to school in 2009 to become an Aesthetician. This means I added skin care, waxing & makeup artistry to my list of skills, on top of nail design. I became licensed for that in 2010. 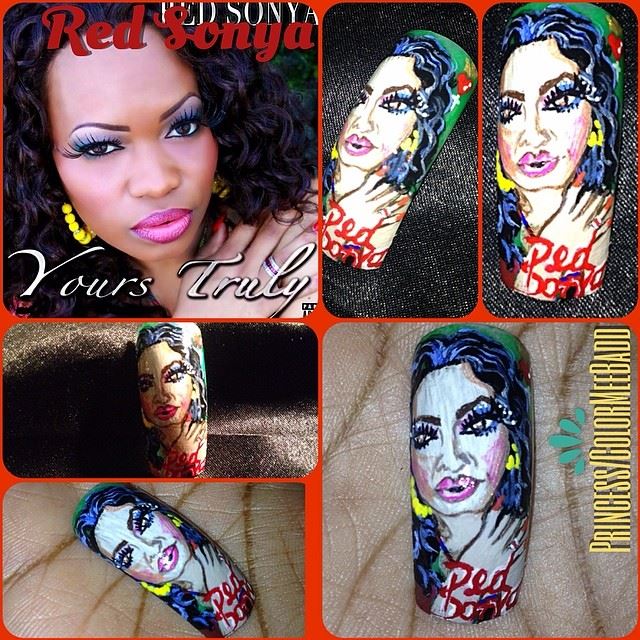 ● What gave you the idea to paint pictures on press on nails?

◆ I’ve always did nail art on nails. My first nail art likeness was of a poodle I painted for a former client, who adored her dog. That first nail art painting took me 3 hours! When Tupac and Biggie passed, I did likenesses of them both and it got A LOT of major local attention in 1997. After that, my clientele tripled, most of them were BCU students. Since then, I have painted Aaliyah, Left Eye & my most recent was Michael Jackson, who I’m a huge fan of. Those designs were tributes to artists who passed away. Unfortunately, my earlier nail art images were stolen by a former salon owner but I managed to keep the Tupac Shakur portait.

● Did it take a while for you to get good at transferring pictures to nails?

◆ I’ve always drawn images of people since I was a child. It takes time & patience because you’re painting on such a small, narrow canvas.My clients appreciate the effort, they tell me all the time they don’t see how I do it. Patience & passion, I have both, and thats how I do it. 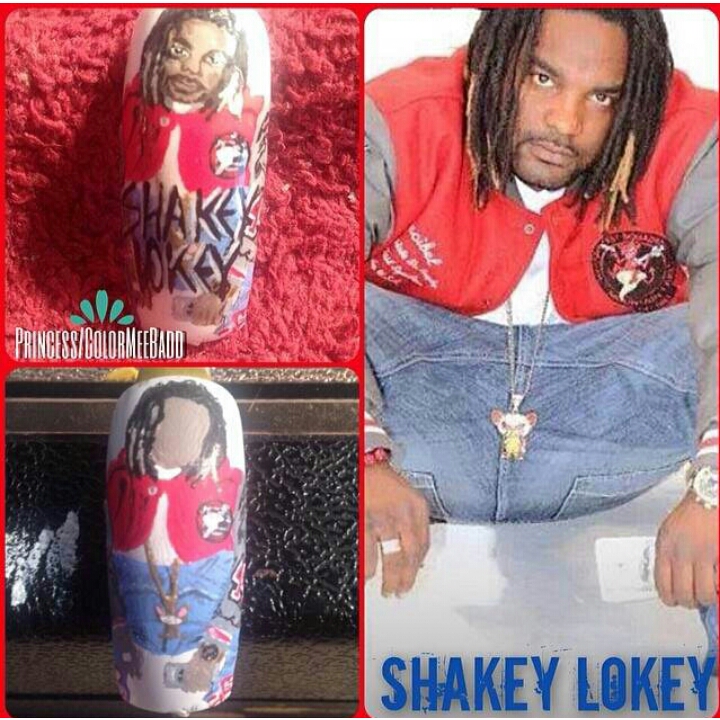 ● What encourages you to paint local artist on your works?

◆ The idea came to me about a month ago because the local urban music scene is growing.My producer, KLC, and I were on the phone one day, and he said to me, “You know, it’s a good thing you live in Daytona because you’re my eyes and ears as to who’s doing WHAT in your town because I don’t know a SOUL there.” I would send him fellow artists’ music, he always gave feedback and said there’s alot of talent here. He had a second studio in Tampa but now he’s thinking of relocating to this side of the state. For those not familiar with KLC, he was the lead producer for Beats By The Pound and he was in-house production for No-Limit Records. 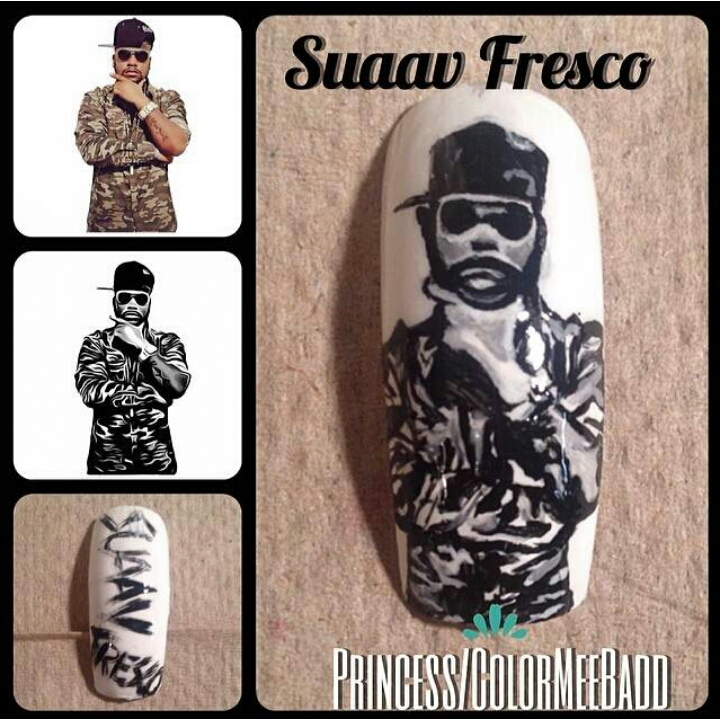 ● How do you think this venture helps local artist? Does this also help you? 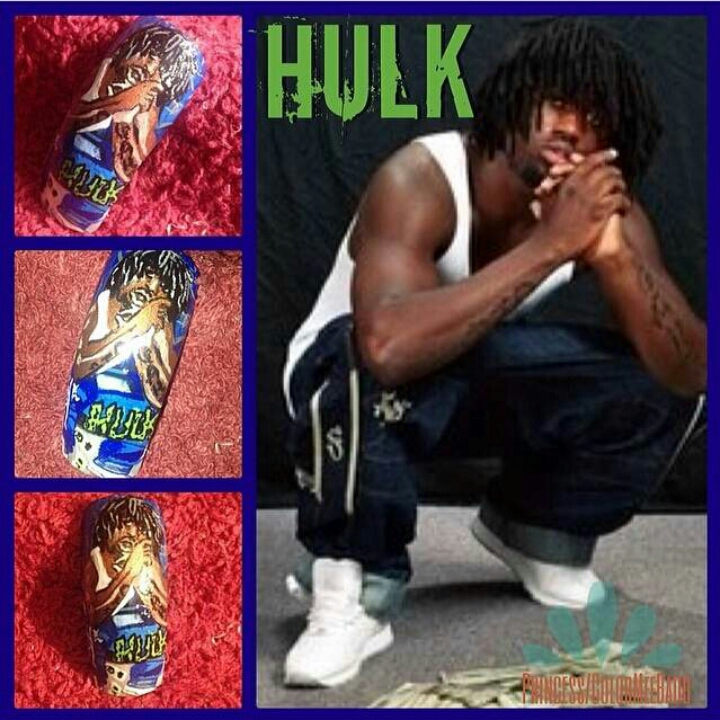 ● How do you feel about the music scene in Daytona Beach?  If you could give advice to up and comimg artist,  what would it be?

◆  I love what’s going on with the local music scene. Local artists realize that’s it’s more to it than just rapping and dropping a CD.They’re beginning to strengthen their brands with apparel, media advertising and street promo. I would tell anybody you gotta get out there and grind! Hell,I sold CD’s out the back of my trunk before I got my first major deal! But the artists are doing their thing, salute to them.

● So you do music also, is that a passion or a hobby for you?

◆ Yes, I do music too, I am Red Sonya. As of now my album Code Red is almost conplete. It’s executive-produced by KLC, I have a few features on there from KLC and other artist also. But my music is my passion as well as my art. I started singing at age 7, and rapping around 11 years old. My father was in a band and played Tenor Sax, so it’s in my blood to do music.

● What are your ultimate goals? Career wise and in life?

◆ My ultimate goal? It’s to be successful in all that I do. I want to do it all! I’m shopping for a shoe line I’ve designed and I’m finishing a movie script. I have some industry people in Miami waiting on it. I’m also working on developing some beauty products. I want to be a mogul….PERIOD 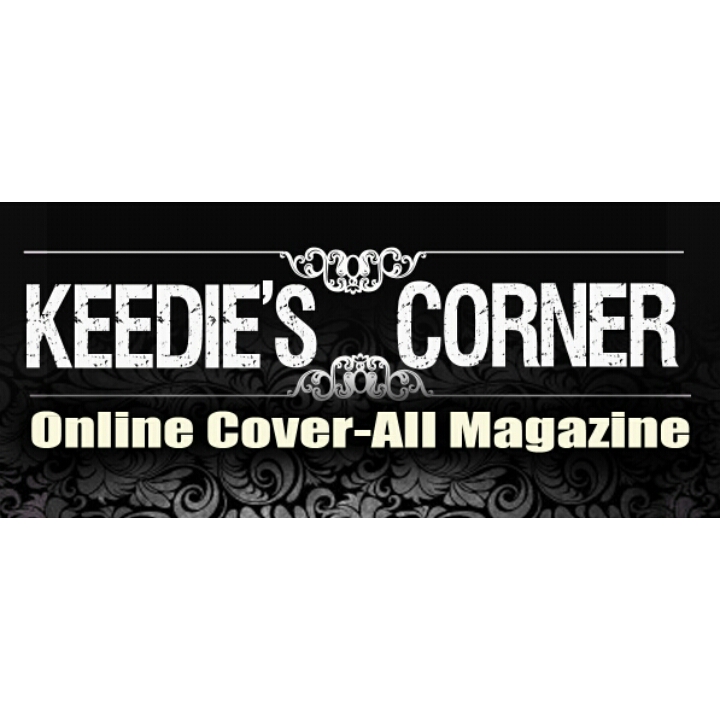 DO YOU NEED YOUR STORY TOLD?