Now, before I dig into what bothers me about this situation lets give credit where credit is due. American Pharaoh credentials…

American Pharoah (foaled February 2, 2012) is an American Thoroughbred racehorse who won the American Triple Crown and the Breeders’ Cup Classic in 2015. In winning all four races, he became the first horse to win the “Grand Slam” of American horse racing. He won 7 of his 8 total races this year. Kudos to his jockey (Victor Espinoza) training staff and owner (Ahmed Zayat of Zayat Stables, trained by Bob Baffert).

Now for Serena’s year. Williams won 53 of the 56 matches she played this year, including three of the four Grand Slam events, and held the No. 1 spot in the WTA rankings every week.

Now the fact that the award is called “Sportsperson“should tell you were I’m headed with this. On top of that, humans have been the only ones to win this award since its birth. Below are a couple of quotes from Sports Illustrated about the issue.

I don’t even want to declare who is more deserving of the award. I really want to speak on another issue that was brought back to my attention. Before I do I want touch on another matter at hand and it is the regard for human lives and its new perception in society.

We have being dealing with a uncanny year when it comes to national tragedy. One is, what seems to be a epidemic to me,  the mass murders/brutality of citizens from the hands of the police. Also, we have had another bad year of terrorist attacks. From the white supremacist Dylann Roof shooting and killing nine black people during a Bible study at the Emanuel African Methodist Episcopal Church in an attempt to spark a race war, to the Colorado Springs shooting that stemmed from an anti-abortion movement, to the San Bernardino, CA shooting which was ruled terrorism, to the ISIS attacks in Italy. Also, the hundreds of attacks that occurred in other countries that never made top news in America. These situations have really shed light on the true colors of how certain people value certain lives over others. Especially when it comes to race. One case being the most recent backlash the Muslim Americans have been getting do to the rise of terror to the hands of ISIS. Some feel that the banishing of all Muslims is the only way to solve the act on terror whens it comes to ISIS. This method is highly absurd to me but we can touch on this issue at a later time. My focus is a tad bit different.

Today I want to speak on Human lives vs (wild/domestic) Animal lives. One situation in particularly started this thought process of mine. The call to boycott Micheal Vick from signing to the Pittsburg Steelers. As you know Micheal Vick did close to 2 years in prison on charges of felony dog fighting conspiracy. 20,000 animal activist and Steelers fans signed a petition in hopes that the deal to sign Vick would dissipate. Unfortunately, for them, the deal went through and Vick joined the team. Since Vick’s situation with dog fighting he has bounced back remarkably. He paid his depth to society, took all blame, and even joined forces with HSUS to help stop the underground activity of dog fighting. The confusing part about this situation is that Ben Roethlisberger was accused of rape back in 2008. And it’s not like he won the case or got acquitted, they simply dropped the case and settled out of court. The same exact situation happened again this time in 2010. Ben was hit with a 6 game suspension that time.

Yet, no one seems to care about these women’s lives. It seems Pittsburgh fans just brushed this under the rug and welcomed there beloved Ben back with open arms. Now can I blame Pittsburgh fans for not boycotting Big Ben like they did Vick, technically no, seeing that they all my not be women rights activist. In the same note I’m pretty sure not all those who signed the petition weren’t only animal activist.

It continues. This time with the fall of Cecil the Lion and Jimmy Kimmels reaction to it. See the clip below.

Before I over reacted I searched for the big stories of African Americans being killed by police officers/neighborhood watchmen (Sandra Bland, Trayvon Martin, Eric Garner, Micheal Brown) seeing that they would most likely be covered, and couldn’t find one reaction video from Kimmel. I’m not saying there wasn’t a reaction but I was just really hoping he had the same kind of reaction for these lives, as well. He did bring Obama to his show to speak about Ferguson, but its wasn’t as intense. Kimmel even had time to squeeze in a joke. Don’t get me wrong, I don’t know his personal connection with Cecil and I’m not attacking his empathy towards human life. I’m simply making a case about public perception towards human life.  It seems as though the fight in the media is to prove wether or not people deserved to die verses stopping them from dying in the first place. Now just imagine how that may be perceived in the public eyes to constantly see the media trying to justify some one dying by police because they may have been a “criminal”  or “thug”?

Now going back to this Serena vs Pharaoh situation. I don’t follow horse racing so when I first Google’d him my initial reaction was “a horse?”. After I took the time to think about it I said to myself “Well, they do have to keep up with the horse, train the horse, etc. so you can’t take that away from them.” Yet, I can’t help but think that, well, why would they want them to race if they are known for getting killed if they endure an injury? I mean, for those who put animal lives so high why would they even want this sport to have light shed on it, right? They don’t feel this is exploitation of animals just as well as dog fighting? I’m pretty sure a horse would’t race on it’s own. This is extreme but I feel it is necessary to put into the light. I don’t feel people can be half way activist. Like those who boycotted Vick, I wonder if they eat meat or costume products that come from the death of animals.

Right now what I’m seeking is understanding. I had an incident happen that hit home for me and my community. A local woman went viral after posting a picture of her dog with his mouth tapped shut with the caption “this is what happens when you don’t shut up.” I have to be completely honest, from the things I have posted about the “Black Lives Matter” movement I have created a lot of tension with my fellow comrads on my Facebook account. Mainly, if not only, from white people. Amazingly, some of the same people who argued that “those thugs shouldn’t have broken the law” when speaking of the lives that were lost to the hands of police, came together unitedly and with vengeance to catch this woman. The woman was found I believe a week later. My thoughts were “Hmmm, now just imagine if they cared about human lives in the same manner”.

The understanding I want is what am I missing? What would make a person value animal life over human life? I rebuttal myself by saying maybe these people feel this way because animals can’t defend themselves. Which is very true. My thing is if we can’t value human life first, being that we are humans, how can we value anything for that matter? If the point of saving animals lives is for the sake of the Earth then aren’t human lives the most important seeing that we are the dominant species of the planet Earth? We, as humans, have the ability the restore this hell on Earth. To me this is a sign that people have given up on humanity. Maybe they feel that humans are a lost cause and that some people just won’t change. Maybe all we have left is the natural instinct that animals have to just nurture the planet. I hope this isn’t true and I’m am sorry if animals lovers feel they are being attacked. That is definitely not the case. I’m purely just a man who feels that saving the humans should be the leading agenda of saving the Earth. I also apologize for going off subject with the Serena and Pharaoh situation, as well. I think this was just my breaking point.

The reason why I’m comparing this situation is because I feel that why publicly take away Serena’s win for a horse that doesn’t even have feelings to be upset about not winning? Why can’t people just be happy that an animal was even considered in a an award race the caters to humans? Thats just my thoughts. My opinion isn’t law.

P.S., Caitlyn Jenner won Woman of the Year and she has a Penis….but I’m sure no one will outrage that one. Hmmmmm…..

Madonna needs to have every seat in the free world! According to TMZ the material girl thought it would be cute to discuss a pic of her son Rocco Ritchie while he was in a boxing ring by saying,

“No one messes with Dirty Soap! Mama said knock you out! #disni**a.”

To which she drew immediate fire!

She then went back on her Instagram and changed the caption on the picture. This time she wrote,

“Ok let me start this again. #get off of my d*ck haters!” 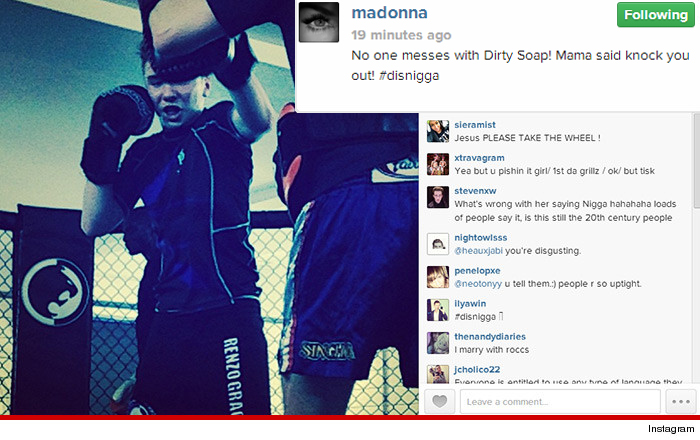 We knew at some point people were going to say…hmmm if she is calling her white son “nigga” what is she calling her BLACK son? And of course we were right because that is now the question on people’s minds tonight! Oh yes let’s not forget the gorgeous little boy David that she adopted from Africa seen with her in earlier times…