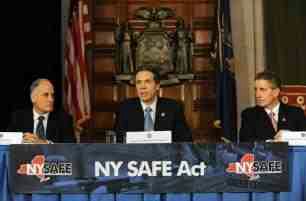 Gun control advocates won a major victory Tuesday, but the fight over New York’s SAFE Act is far from over.

An appeal of Chief U.S. District Judge William M. Skretny’s decision upholding most of the new law is all but guaranteed.

And that appeal may come from supporters of the law, as well.

“I think there’s going to be appeals on both sides,” said Brian T. Stapleton, a lawyer for the New York State Rifle & Pistol Association, one of the groups fighting the law.

Stapleton’s prediction is based on Skretny’s decision to uphold two key elements of the law, the state’s ban on assault weapons and high-capacity magazines, and his rejection of a third component, the seven-round limit for magazines.

The judge called the seven-round limit “tenuous, strained and unsupported.”

In a decision that has been much anticipated, Skretny said most of the SAFE Act is constitutional and should remain in effect.

He also found the law, a response to the Sandy Hook Elementary School shootings in Connecticut that killed 20 children and six adults, is not a violation of the Second Amendment.

“The majority of the challenged provisions withstand constitutional scrutiny,” he said in his decision.

Filed in March, just two months after the law was passed, the federal court challenge has cast a national spotlight on Buffalo, in part because legal scholars believe the case could end up before the U.S. Supreme Court.

If so, the civil suit could be one in which the court finally decides whether the Second Amendment allows government to regulate ammunition clips and assault weapons.

In what could be the first of many court decisions regarding the law, Skretny acknowledged that “so-called ‘assault weapons’ and large-capacity magazines” may be in common use –a legal benchmark for constitutionality.

But he also suggested the state’s regulation of those weapons and magazines is related to an important governmental interest: public safety.

“Accordingly, the act does not violate the Second Amendment,” he said.

Stapleton would not comment on what aspects of the judge’s ruling his client might appeal, but he did mention Skretny’s acknowledgement of the “common use” principle.

“He seems to find that these weapons are in common use but nevertheless finds the act does not violate the Second Amendment,” he said.

In his ruling, the judge refers to statistics that indicate only 2 percent of the guns owned by Americans are assault weapons, and he concluded that the year-old law is limited to a subset of firearms that New York has determined are particularly dangerous and unnecessary for self defense.

“It does not totally disarm New York’s citizens,” he said, “and it does not meaningfully jeopardize their right to self-defense.”

The law, which was passed in January 2013 with the strong support of Gov. Andrew M. Cuomo, expands New York’s assault weapons ban to include semi-automatic weapons with characteristics of assault weapons.

It also prohibits ammunition magazines that hold more than 10 rounds.

Skretny upheld those aspects of the law but rejected the law’s prohibition on loading more than seven rounds in those 10-round magazines.

He also found other aspects of the law, including the regulation of pistols that are automatic weapons, to be unconstitutional.

The case, filed by the Rifle & Pistol Association and others, has attracted the attention of virtually every major gun control and gun rights organization in the country.

Many of those groups have filed amicus curiae, or friend of the court, briefs detailing why they think the SAFE Act violates or adheres to the Constitution.

Skretny referred to those briefs throughout his ruling.

In one instance, he mentioned a brief filed by outgoing Rochester Police Chief James M. Sheppard and his conclusion that assault weapons “are designed for one purpose –to efficiently kill numerous people.”

He also mentioned the mass shootings in Newtown, Conn., and Aurora, Colo., to suggest that New York’s ban on assault weapons and high-capacity magazines is part of its lawful interest in public safety.

Gun rights advocates have countered by suggesting the law is unconstitutional and pointing to a 2008 Supreme Court decision that, for the first time, supported the notion that individuals, not just militias, have the right to own guns.

In that case, District of Columbia v. Heller, the court ruled that a Washington, D.C., ban on handguns was unconstitutional because it restricted an individual’s Second Amendment right to self-defense, especially in the home.

Gun control advocates are just as quick to point to Heller because the court ruled that the Second Amendment right to own guns, like most rights, is not without restrictions.

Justice Antonin Scalia, who wrote the opinion, said the Constitution does not give people the right to keep and carry any type of gun whatsoever.