It’s no secret that we are about to witness what may be the biggest event in combat history! Undefeated Floyd Mayweather (49-0) will face UFC multi-title holder Conor McGregor in a boxing match.

For people who actually follow combat sports they should know that with this being a boxing match it’s almost a no brainer that Floyd should take this easily. But there are a lot of things to factor in before you can just count McGregor out. Yes, we do know that if this were a Mixed Martial Arts match McGregor would most likely dominate Floyd. This match only makes sense to be a boxing match though. It only makes sense because both sports train on striking. It wouldn’t make sense to do mixed martial arts when boxing doesn’t cover all the elements that fall under MMA. Now let’s to see the elements that could be pro’s & cons for the fighters

Let’s talk about age. Conor is 11 years younger and clearly has that edge. On the flip side, Floyd has beaten fighters who were 10 years younger and heavier. I don’t want to simply count him out because of age. For instance, we have fighters like George Foreman and Bernard Hopkins who were older but vicious. Floyd’s last fight didn’t show any slack off. I don’t see this being a huge problem for him.

Now let’s get into fight length. Floyd has fought championship rounds that have gone the distance of 12 rounds. Conor has only gone 5 rounds. Although MMA rounds are 2 minutes longer than boxing rounds. This could become a factor when they get past round 5. Especially fighting a defensive fighter like Floyd. Making your opponent miss can drain them very quickly. Floyd may be the best defensive fighter the sport has ever seen. This fight could get very interesting if it goes past round 6. I’m not sure how well Conor is with adversity. Especially after seeing the 1st Diaz fight. Hopefully Conor has the cardio to take it the distance, if it goes there. My personal experience with fighting MMA and boxing, I think boxing takes more cardio. If all else fails in MMA you can resort to grappling or clinching to regain energy. In boxing they break things up immediately and you get right back to it. Boxers also throw punches more rapidly because that’s the only thing they can rely on.

Punching power. I know most people will try to give this to Conor automatically but let’s take a second to analyze this properly. Floyd has a knock out rate of almost 50% and yes those came in his early career.  Later, he became more of a defensive fighter. Now let’s say Conor is fortunate enough to have a 20 year career and is able to make it to 49 fights, will he still be knocking people out? Who knows. Secondly, you have to factor in the glove size. Not to take away from Conor but glove size does make a difference. I do give it to Conor though, his hands are beautiful. He’s had some amazing knockouts. He can make very adversary opponents look like novice competitors. It would definitely be interesting to see if Conor can land a clean shot on Floyd and hurt him. Floyd has been in 49 professional fights and has never been on the canvas, let alone 8 counted. That is a remarkable stat. Says a lot about his defense and maybe his chin. Has he fought anyone that hit as hard as Conor? Who knows.

Defense. I’ll be honest, MMA isn’t a sport that is big on striking defense. They do have leg checking and they do block head kicks. Other than that it’s mostly brutal. Not saying that they don’t block because they definitely do. MMA is just more barbaric. There are MMA fans who actually think less of Floyd as a fighter because he is defensive. Conor has an open arm type of style. He is just very fortunate to be lightning fast and powerful so his defense doesn’t really matter. This can be damaging for him when it comes to getting points. All Floyd has to do is out score him and not get hit which he is the best at. Conor is a great counter puncher and so is Floyd. This may be the most interesting part of the fight. Seeing how they counter each other. I can see this fight being dry for the 1st and 2nd round. Floyd doesn’t want to get hit with a bomb and Conor doesn’t want to lose by the point system. 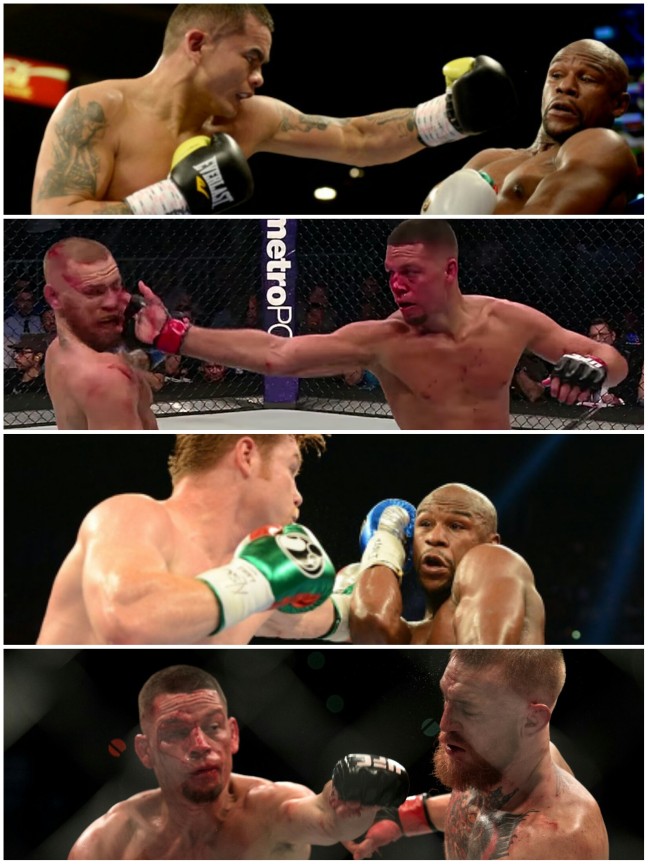 All-in-all I think if Conor wants a chance to beat arguably the best boxing of our time in a boxing match he has to do serious damage in the first 4-5 rounds. If it gets past that I see him having a slim chance of winning. Socially I see people argue about this and there is this strange misconception that people don’t think Conor is a great fighter. That is completely false. People are simply surprised about the disrespect towards Floyd’s ability and legacy. You may not like him outside of the ring, you may think that he cherry picked his opponents, but let’s be realistic. Over a 20 year career and 49 fights couldn’t somebody have beaten him if he wasn’t as good as we thought? The craziest argument I saw about Floyd is that he fought Mannie after his prime. Which is kind of ridiculous seeing that thier debuts are only a year apart and Floyd is older than Mannie. That completely destroys that logic and actually proves that Floyd was more out of his prime than Mannie was.

The tickets to watch this at the movie theater will hit you for $40. Considering the magnitude of the event and the fact that you get to sit in a reclineable leather chair, I don’t think it’s that bad. I don’t care what people say about this fight, I LOVE IT! I love the energy it brings, I love the competition. Floyd is putting his undefeated record on the line versus a younger MMA knockout artist. How can you not be impressed? Conor is taking a chance in another sport (technically) against the very best person. You have to honor them both. I can only seen you hating this fight if you are a die hard MMA fan but hate boxing or a die hard boxing fan but don’t care for MMA. I’ll definitely be watching.